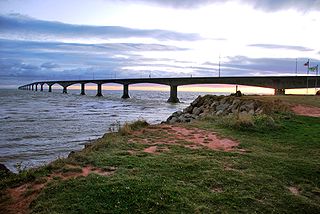 Nestled between Nova Scotia and New Brunswick, Prince Edward Island is surrounded by the Atlantic Ocean on all sides. Visitors to the PEI can now access the island by ferry or bridge. In 1998 Prince Edward Island was connected to mainland Canada by Confederation Bridge, the world's largest bridge spanning ice-covered waters.

Agriculture is Prince Edward Island's mainstay. Over half of the island's fertile red soil is used for farming. Potatoes are the province's primary crop. Miles of sandy beaches and attractions like golf and camping make tourism a vital element of the province's economy.

Prince Edward Island is also the land of Anne of Green Gables, Lucy Maude Montgomery's world famous fictional character from a series of books by the same name. Wherever you travel in PEI, Anne's image is never far away. An Anne of Green Gables musical plays yearly at Confederation Centre in Charlottetown, PEI's capital city, and her familiar red hair and freckled face adorns many a t-shirt and a variety of souvenir shop merchandise.